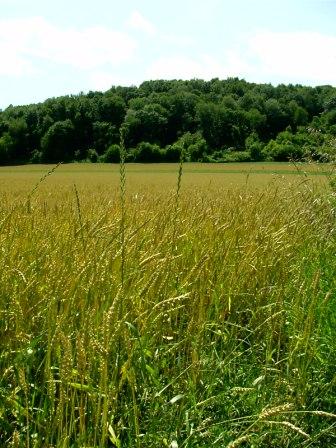 We, the faith community of Black Hawk-Bethlehem United Methodist Church, exist to grow generations of faithful followers of Jesus Christ by:
· Preparing the fertile soil bed of faith
· Sowing seeds of God’s Word in peoples’ hearts
· Cultivating and nurturing each individual’s spiritual growth
·Harvesting the fruit of souls made righteous by God’s grace 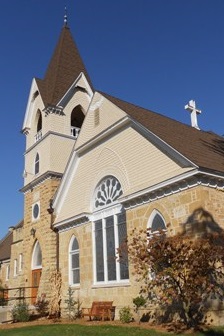 On March 4, 1864, several faithful families decided to form a church in this farming community of Sauk County. The Articles of Congregational Inc. were drawn up, adopted, and named Bethlehem Congregation of Troy.  An acre of land was donated for a church building as well as a plot of ground across the Harrisburg Road (now Hwy C) for the parsonage.  Due to lack of finances, the building was delayed until two years later.  On October 14, 1866, it was dedicated, debt free.  The total cost came to $3,500.  Records indicate there were 33 proud members.

As the years passed and the Bethlehem Evangelical congregation grew in numbers, a decision was made to build a new church and a plan was presented on April 13, 1901.  The beautiful block and stack building of native limestone was dedicated on December 13, 1901.

More growth. More families. More space. In March of 1948, plans were made for a larger house of worship. Members of the congregation helped in many ways, including planting, tending and harvesting 16 acres of corn as a means to raise funds.  Ground was broken on March 29th, 1948.  A year later, on March 26, 1949, the cornerstone was laid.

For over 150 years, God’s people have remained steadfast in their service to the community and world around them. Through the various ministries of Black Hawk-Bethlehem United Methodist Church, we commit to the ongoing work of PREPARING the soil, SOWING the seeds, CULTIVATING the field and HARVESTING the fruit as we grow generations of faithful for years to come.

We believe spiritual training begins in the home.  The church encourages families to read the Scriptures, pray together and develop godly practices in their homes.  The church supplements and encourages families by providing Christian discipleship through our programs of Christian Education. We offer Sunday school for children in preschool through High School as well as studies for Adults.

When persons unite as professing members with a local United Methodist Church, they profess their faith in God, the Father Almighty, maker of heaven and earth; in Jesus Christ his only Son, and in the Holy Spirit. Thus, they make known their desire to live their daily lives as disciples of Jesus Christ. They covenant together with God and with the members of the local church to keep the vows which are part of the order of confirmation and reception into the Church:
1) To renounce the spiritual forces of wickedness, reject the evil powers of the world, and repent of their sin;
2) To accept the freedom and power God gives them to resist evil, injustice, and oppression;
3) To confess Jesus Christ as Savior, put their whole trust in his grace, and promise to serve him as their Lord;
4) To remain faithful members of Christ’s holy church and serve as Christ’s representatives to the world;
5) To be loyal to the United Methodist Church and do all in their power to strengthen its ministries;
6) To faithfully participate in its ministries by their prayers, their presence, their gifts, their service, & their witness;
7) To receive and profess the Christian faith as contained in the Scriptures of the Old and New Testaments.

Music has always been an integral part of Bethlehem/Black Hawk Church.  About 15 members keep the Sunday morning chancel choir active since their organization in 1938. That’s close to eight decades of singing praises to God!

Our Sunday school students have opportunities to minister through music during Sunday morning worship several times a year.  Whether its singing and moving to awesome VBS music, sharing the Christmas story through verse & song, singing the Palm Processional on Palm Sunday or playing piano for the service, we encourage our young people to share their musical gifts and talents with the congregation.